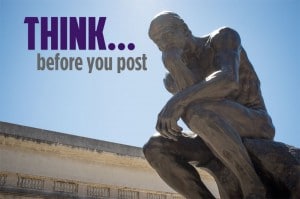 As capital hill staffer Elizabeth Lauten found out, a facebook post that can take 10 seconds to write, can ruin a career years in the making.

In case you missed it, here is what she said:
“Dear Sasha and Malia, I get you’re both in those awful teen years, but you’re a part of the First Family, try showing a little class,” Lauten wrote. “Rise to the occasion. Act like being in the White House matters to you. Dress like you deserve respect, not a spot at a bar.”

Now, it isn’t the worst thing anyone ever write, not by a long-shot. But the president’s children are off limits and she went a bit too far as people viewed her targeting the president’s kids. She was forced to resign, and has likely ruined a promising career. The worst thing I heard was she actually had a business consulting on social media.  She should have known better.

So, what can you take a way from this?
I always advise social media clients to keep politics out of their posts. (Now as Lauten was a political staffer, commenting on politics is part of her job). But for most businesses, they should stay away from politics as half the people may like your posts, but many will be turned off. Do you really want to alienate potential customers just because they have different political views?

THINK!!! BREATH & WAIT 5 MINUTES
If you are writing anything that can be taken as controversial, take a breath, read and re-read before posting. This is also a good idea for blog posts and emails. Don’t send in anger. Take a step back, before posting/sending. We have all (me included :() sent emails we should have deleted.  Utilize the 5 minute rule:  If you have something you absolutely want to post that may be controversial, walk away, wait 5 minutes before posting/sending. Many times that brief time to reflect will change you mind.

In Conclusion: We have all sent emails we wished we hadn’t, wrote something in a blog or a tweet or Facebook post we wish we could take back. But as people find out even their deleted tweets are out there for eternity. In fact, people have found out that deleting a tweet is even worse as everyone jumps on that fact. Fortunately, if you follow our advice, and utilized the five minute rule, you can avoid the problems that arise from an inappropriate posting.  And, as always you can contact us, we are happy to help with any web, social media issues you may have.

Good post Barry. People fly off the handle and post in anger both in blogs and social media. Taking a breath is a good way not to F up your career or reputation.