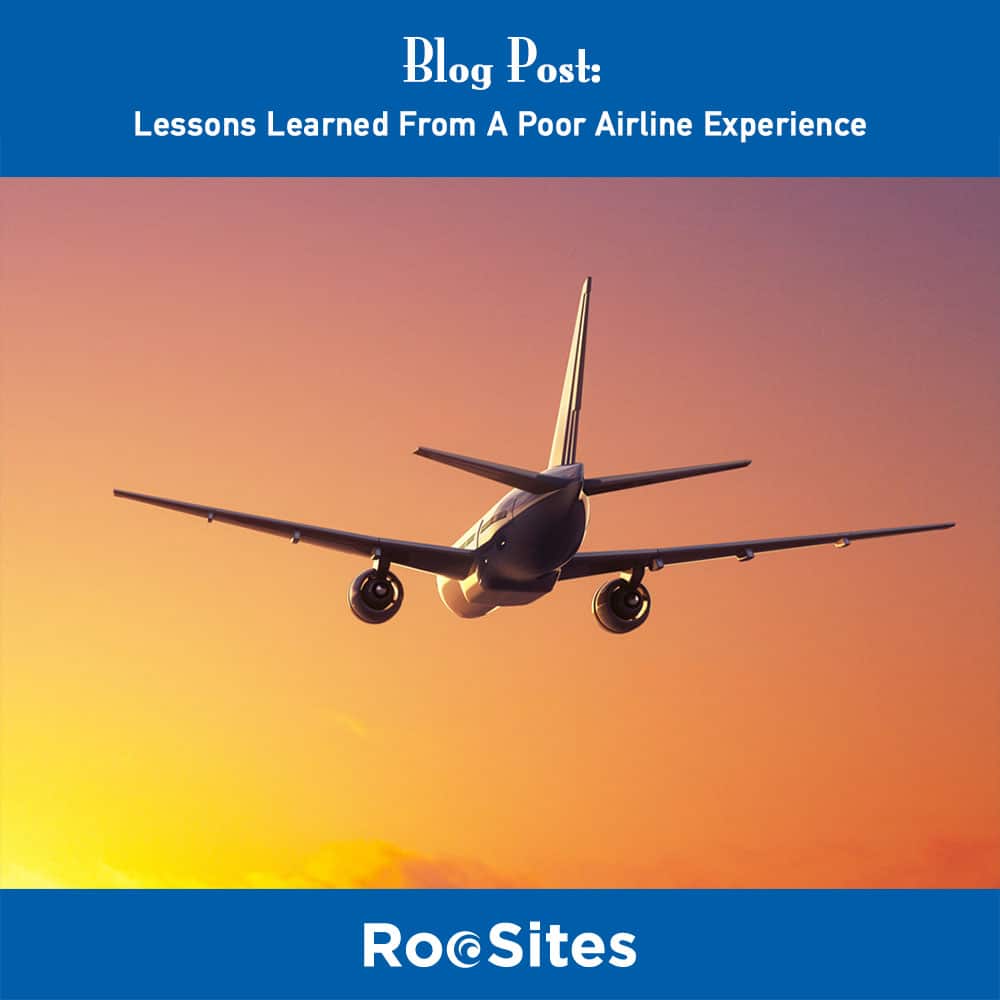 I recently had  a terrible experience with a major airline.  From this experience I learned a few lessons that I will use in my business and which other small businesses can hopefully learn from as well.

First off let me give you some background:

I was booked on a flight from Tampa Florida to New York City for a friends daughter’s wedding.  We had an early flight and as such went to bed early.  When I woke up, I checked my email and saw my flight had been canceled overnight and we were re-booked 4 hours later than our original flight. Also, they booked us on a flight at an airport over an hour away in Sarasota Florida.  I went online to get our new boarding passes but I kept getting an error on their website and it said to call their 1-800 number.

The wait on the phone was two + hours!  The live chat on their website was 2 hours as well!

This was inexcusable, and the nightmare had begun!  When I finally got to speak to a human, he fixed my boarding pass issue quickly and we then could head to the airport.  Unfortunately, as you will see, the experience continued to get worse…

When I finally got to the airport I went to the kiosk to drop off my bag, but it was out of service! Worse, there was NO ONE AT THE COUNTER!!!   All the other airlines had people. Over 45 minutes later someone showed up and the line was now 50+ people deep of angry passengers! People in line were actually yelling at this point, and no one could believe how poor the service was.

Next we went to the gate.

The flight was delayed in boarding, yet they made no announcements! The sign still had the original boarding time. So we were left to guess!!!  We finally boarded the plane, and we ended up getting to our hotel in New York at 9:30 PM.  This was roughly 9 hours later than we expected to land at Kennedy. Fortunately, we came in the day before the wedding. Had we left the morning of the nuptials, we never would’ve made it, and the experience would’ve turned from bad to worse (if that’s possible!)

So here are the lessons:

Doing business is not always easy. But if you do the right thing by your clients/customers, then they will be understanding and will use your company again in the future. I can tell you, that I will never go on that airline again unless there are major changes. Unfortunately in the midst of canceling hundreds of flights and pissing off their clientele, this particular airline has been in the news for trying to buy a smaller discount airline.  They would be better served straightening out their own house before looking to expand.  Perhaps they should read, and re-read the following Gandhi quote:

“A customer is the most important visitor on our premises, he is not dependent on us. We are dependent on him. He is not an interruption in our work. He is the purpose of it. He is not an outsider in our business. He is part of it. We are not doing him a favor by serving him. He is doing us a favor by giving us an opportunity to do so.” – Mahatma Gandhi

Editor’s note:  I purposefully did not mention the airline’s name in this blog post.  I am not trying to harm their business, and I truly wish that they would get their house in order as they used to be a great airline, and one of my favorites. If you contact me, I will let you know which airline I am talking about.  However, if you have flown on this particular airline within the last month or so, you know exactly who I am talking about!