Steve Jobs and the back of the cabinet mentalityDecember 25th, 2011

I am only one chapter into the Steve Jobs Biography by Walter Isaacson and I am already fascinated and learning things I didn’t know. You always wonder what drives a perfectionist.   Early in the book Jobs was talking about his adopted father (I won’t use that term again as this man was his father, the biological thing is overrated) and how when they needed something for the house, he would build anything and everything.  He was building a cabinet and imparted on his son, that the back of the cabinet should look as good and built as well as the rest.  Stop into any home improvement store and you will see the back of the cabinet is made of crap wood, and even cardboard.  Job’s dad was insistent and even their fence was made so that the parts you couldn’t see were made as well as the parts you see and looks as good.  When Jobs showed Isaacson the fence was still standing a half a century later, you could start to see why Jobs was so bent on only delivering products which were as good as that fence.

It is funny, as a developer, I was taught by such a perfectionist.  Your code must pass rigid validation, and work on every browser. I spent many painful day early in my career making sure pages displayed ok in Netscape 4x browsers and later Netscape 6.  I remember developers wanting to forget those browsers.   But, to me this was my “back of the cabinet” and to this day we are rigid at RooSites making sure our sites display in a wide range of browsers and of course the iPad.

As I read more I am sure I will have more comments on the book. You have to admire Jobs for allowing the author to let it all fly, good and bad. Jobs was human and there was a lot of negatives as do we all. But intensely fascinating and lessons for us all seem to ooze out of the book. 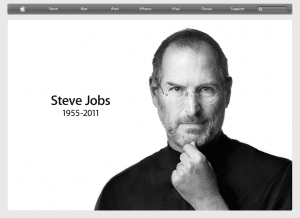