The Importance Of LikabilityOctober 30th, 2019 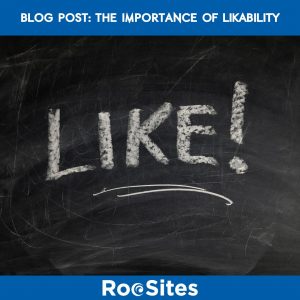 Likability is an extremely tough thing to measure. There isn’t a calculation for likability taught in school and you certainly won’t find it in an advanced calculus book. But likability is so very important for the success of your website as well as your social media profiles. In this post we will examine likability and use case studies to illustrate.

Dictionary.com defines likability as readily or easily liked; pleasing: Most people generally want to do business with companies and people they like and respect. It is fair to say that no one wants to do business with companies they don’t like, unless it is the only source of what they need. For example, say you were in manufacturing and only one company makes a part you need, you will put up with a company you don’t like out of sheer necessity. Otherwise, you will go elsewhere, to a company you like better.

Personally likability is even more important than price (within reason). I for one will shop at a local store if I like the people and get good service.   This actually came up today. I needed some maintenance supplies for the house. Although what I needed was available at Home Depot a bit cheaper, I chose to a local hardware store. These local hardware stores are a dying breed in America, and it is a shame. This particular store, you feel like you’re going back in time. They had what I need and the owner came over immediately and ask me if needed help. This kind of Service is no longer available at big box stores. As such most people shop online whenever possible. However there are times you need things right away as I did today so I had to make the decision between the big box store and the local hardware seller. I chose the one I like better.   So, likability won out.

Psychology Today discusses Likability—“it’s a key predictor to success in all areas of life. From getting invited to the right parties or scoring that job promotion, likability can get you where you want to go. Likability pulls people toward you, so a good way to maximize your success is to develop attractiveness that increases your likability quotient.

To illustrate my point about likability I am going to mention a couple of different cases, one where a company does a great job and another where a person does a horrible job. The contrast is unreal, one doing everything right, and the other doing everything wrong.

I have managed a website for Signarama Walpole for a few years now. They make signs and graphics of all types, such as Company signs, vehicle wraps, illuminated signs, you name it they make it. My strategy for them is to show off the great work they do. It’s easy to do as we can post pictures and stories about recent signage projects. The work speaks for itself, so they don’t need to brag. And therein lies the key, we don’t have to come off as braggers, we just display the amazing work they do and let their followers and customers give their opinions. Another way to do this is via Testimonials, which work extremely well, if they are from real sources. We wrote a post years ago entitled: “Testimonials are great (if legit)” which discussed this very topic. The problem with testimonials is a lot of times is that you go to a website and they look fake. You see things like: “They are great” signed Bill from Any town USA”. To me if you’re going to have a testimonial, have the person’s name and if applicable the company they work for as well as their title. This gives people confidence that the testimonials are legitimate and is also a good way to show how likable your company is. Because what’s better than an actual customer/client spouting your companies’ virtues?

Whenever we post to Signarama Walpole’s social media accounts, we get a very good response. Their audience is extremely loyal and always has nice comments about the projects they have completed. As we said above, one thing people like are companies that don’t appear to be bragging. Because their work is visual it’s so easy to display, and there’s no need to toot their own horn.

Another thing we do with the Signarama Walpole account is whenever we put up a new project we always mention the company they did the project for, describe the company and link to their site. We then tag them wherever possible, and it has led to some of our posts going viral. The reason is simple, every company likes free publicity and links to their website. Plus a photo of a beautiful new sign looks great and portrays their company in a positive light. So what is a win for sign room on Walpole, but is also a positive for the company they have just completed the sign project for. And this of course is led to a lot of referrals from happy customers.

Many years ago I did a website for a young pop singer from New York. He was very fortunate in that he had very wealthy parents. So they could hire the best music producers money could buy. They had a song & video that was very cute, more of a Disney Channel type of song/video. It was very nice and wholesome, and they showed it to one of the top producers in the world. His thought was that the song was decent and the video was okay but that it portrayed the singer getting into limousines, going to his mansion and flying in his private jet. His thought was that kids want to watch a video that they can relate to, that show a regular kid being a kid. This was good advice, unfortunately, people don’t always listen, no matter your credentials or track record of success.

Well, sometimes people have more money than sense, and did the opposite of what the expert told them to do! They went with a rap producer and the rap music videos they created were of the pop singer literally throwing dollar bills, singing lyrics about how rough they’ve had it while getting into the Rolls, and flying in their family Gulfstream jet. It was not only disturbing to watch, people were quick to realize that this uber-wealthy kid had never worked a day in his life, and the music and video was panned universally. They were paying for views and social media likes and it was obviously bogus, another real turnoff. Even worse, some of their YouTube comments come from people with fake names like “John Smith”. So even the least suspicious individual realizes the comments are fake.

And unlike Signarama Walpole, his videos and social media content are all about “me, me, me”, just narcissistic nonsense and hard to watch and listen to.

Speaking of narcissism, leaders with such tendencies ruin companies over time. Entrepreneur Magazine says: “And while successful entrepreneurs tend to have high levels of self-confidence and an intense drive for success, often they’ll fall prey to the problems associated with the darker aspects of narcissism: Specifically, they take unnecessary risks, hold too tightly to their vision when change is needed and fail to recognize the work and sacrifices of those around them.”

So when you are considering your website content and social media postings, consider what people will think reading your content and posts. Do you come off likable? Be humble, do good work, and portray yourself in a manner that shows the quality of your work without sounding like a buffoon. Be appreciative and let your customers/clients know how much their business means to you. Your reward will be more repeat business and many referrals. Because not only do people want to do business with companies they like, they also like to tell their friends and colleagues about good experiences they have with a company. As always, if you have any questions, please contact us or leave a question below.

I would love to hear your take on likability. Please leave your comments below.

RooSites is an Award Winning Boston Web Design & Website Management firm with offices in Boston, Foxboro MA, Dunedin Florida and Charlotte North Carolina. We support companies throughout the US.